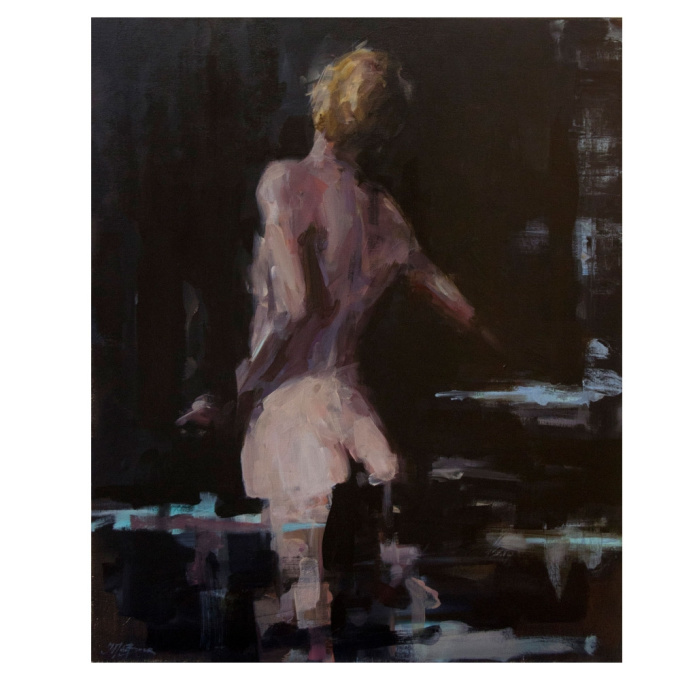 In her 'Under Water' series de Boer works intuitively. As she painted the works in these series, she let go of the originally inended images. Bright waters are turning into dark, mysterious depths. Bodies light up. Whether the depictions can be understood as ominous or dreamy, is up to the viewer.

Jantien De Boer was born in Groningen, the Netherlands in 1984. She attended the Classical Academy for Fine Painting in Groningen where she graduated in 2013. Though classically schooled and her work showing great correlation with the traditional fine painting her thematics are unmistakenly contemporary.

De Boer integrates technique and concept. Her interpretation is as important as the content. Her work consists of powerful and sometimes confronting images that at the same time are rather vulnerable.

De Boer: “Everything revolves around the tension between the two main characters; the figurative that I paint – the naked woman, the face – and the material, the abstract of the paint, the thick drops of colour. Both to me are equally important. That’s where my search lies.”

For De Boer paintings speak their own, visual language. A language of paint and colour: “If I had to compare myself to a writer, I wouldn’t write novels, nor would I be a journalist. I’d more likely be a poet, who with his associations and imagination would summon both questions and clarity”