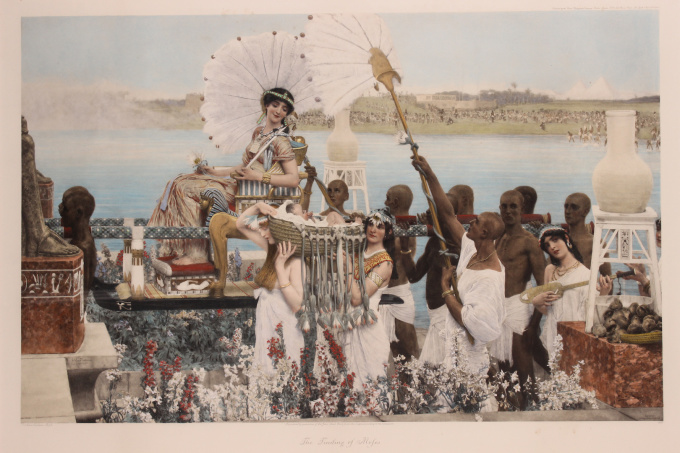 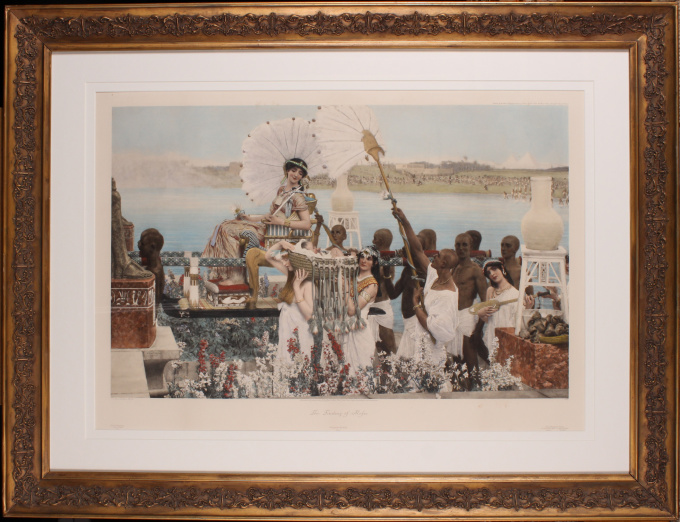 Heliogravure made in 1905 by the Berlin Photographic Company after the 1904 painting by Sir Lawrence Alma-Tadema, colored by hand over time. Dim. 48 x 74.8 cm. In original frame. In late 1902, Alma-Tadema traveled to Egypt (under British protectorate at the time) as a guest of the engineer Sir John Aird to attend the inauguration of the Aswan Dam, which Aird's company had just built. Aird wanted to have an Egyptian painting made by Alma-Tadema for the occasion. The subject became Exodus II: 6, indicating an important event on the Nile: “And the daughter of Pharaoh went down to wash in the river; and her ladies walked by the side of the river; so she saw that boy; and she was moved with compassion for it. "It became one of Alma-Tadema's most beautiful works. We see a royal procession along the Nile. The entourage of the daughter of the Pharaoh walks past lavender and delphinium, she looks lovingly at Moses. To the left a red granite statue of a seated pharaoh," with on the pedestal in hieroglyphs "Beloved by Ra, the king of Upper and Lower Egypt." Alma-Tadema worked on the canvas for two years, until his wife seems to realize that the boy was now two years old and did not need to be anymore.