Jeff Koons was born on 21 January 1955 in York, Pennsylvania and is an American artist known for working with popular culture subjects and his reproductions of banal objects—such as balloon animals produced in stainless steel with mirror-finish surfaces. He lives and works in both New York City and his hometown of York, Pennsylvania. He trained at School of the Art Institute of Chicago and... Read more

Jeff Koons was born on 21 January 1955 in York, Pennsylvania and is an American artist known for working with popular culture subjects and his reproductions of banal objects—such as balloon animals produced in stainless steel with mirror-finish surfaces. He lives and works in both New York City and his hometown of York, Pennsylvania. He trained at School of the Art Institute of Chicago and the Maryland Institute College of Art in Baltimore (1976) and worked as a Wall Street commodities broker before embarking upon his career as an artist. In the 1980s he won international recognition as a radical exponent of Neo-Geo or Post-Pop, a 1980s American movement concerned with appropriation and parody, in reaction to the pared-down art of Minimalism and Conceptualism in the previous decade. Following the example of Pop artists of the 1960s.

Koons used his work to reflect the commercial systems of the modern world. He also referred back to the Duchampian tradition, appropriating an art status to selected products. His vacuum cleaners encased in perspex (1980-81; see 1993 exh. cat., pls 5-9) were classified as monuments to sterility. His immaculate replicas of domestic products, advertisements, kitsch toys and models exercised an enthusiastic endorsement of unlimited consumption, unlike the veiled criticism of some work of the first generation of Pop artists. Koons perceived Western civilization as a driven society, flattered by narcissistic images and with a voracious appetite for glamorous commodities. In his expressions of the ecstatic and the banal he did not hesitate to breach the borderlines of taste; in the body of work titled Made in Heaven (1989-91; see 1993 exh. cat., pls 48-65) he featured explicit sexual photographs and models of himself with his wife Ilona Staller ('La Cicciolina'). Such works were naturally highly controversial.

His works have sold for substantial sums, including at least one world record auction price for a work by a living artist. On November 12, 2013, Koons's Balloon Dog (Orange) sold at Christie's Post-War and Contemporary Art Evening Sale in New York City for US$58.4 million, above its high US$55 million estimate, becoming the most expensive work by a living artist sold at auction. The price topped Koons's previous record of US$33.7 million and the record for the most expensive living artist, held by Gerhard Richter, whose 1968 painting, Domplatz, Mailand, sold for US$37.1 million at Sotheby's on May 14, 2013. Balloon Dog (Orange) was one of the first of the Balloon Dogs to be fabricated, and had been acquired by Greenwich collector Peter Brant in the late 1990s.

Critics are sharply divided in their views of Koons. Some view his work as pioneering and of major art-historical importance. Others dismiss his work as kitsch, crass, and based on cynical self-merchandising. Koons has stated that there are no hidden meanings in his works, nor any critiques.

Koons received the BZ Cultural Award from the City of Berlin in 2000 and the Skowhegan Medal for Sculpture in 2001. He was named a Chevalier of the French Legion of Honor in 2002 and then promoted to Officier in 2007. He was given the 2008 Wollaston Award from the Royal Academy of Arts in London. In 2013 he received the U.S. State Department's Medal of Arts. 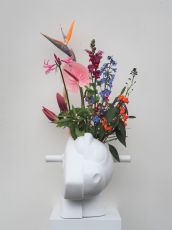 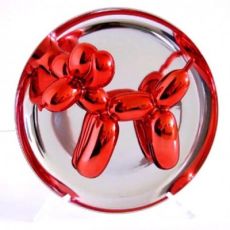 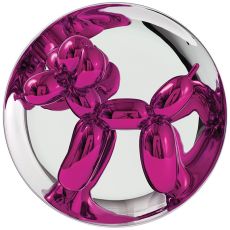 3 Artworks from this artist
52 artworks9 artists
1 - 1 / 1
We use cookies to provide statistics that help us give you the best experience of our site. By using this site without changing your cookie settings, you are agreeing to our use of cookies.
Cookie settingsAllow cookies