(17.03.1922, D. Kahili Karagaysky district of Perm. region – 03.06.2001, Perm). Born into a peasant family, from childhood was fascinated by drawing. In 1937-1941 he studied at Perm. art school. In 1941 he was drafted into the army in 1942 after studying at the Penza artillery school was aimed at the West. the front, at the age of 20 became the commander of the platoon. In the first battle, the artist was seriously wounded and after treatment in the hospital reserve. Awarded orders of the red Star, Patriotic war of I degree. In 1944, returned in Perm, he worked as a military instructor at the school, artist-designer at the railway station "Perm II". Since 1946 worked in the "Vsekohudozhnik" (all-Russian Union of cooperative partnerships of fine arts workers), which was later transformed into the Art Fund. Since 1947, Dudin participated in regional exhibitions. All his life Valentin Illich traveled extensively in Perm. region and across the country. Of creative trips to the industrial enterprises of the region – Chusovoy and Lysva metallurgical factories, Krasnokamsk, Solikamsk and bumkombinat artist brought lots of picturesque sketches, which with great respect portrayed the working man. The artist worked in the shops, trying to capture features of the labor process, and authentically expressive to capture images of people. Full-scale studies served as the basis for thematic paintings and portraits ("Shop coated paper", "roll forward", "Solikamsk paper, Shop emalposuda"). One of the favorite genres of the artist was the landscape. A special feeling warmed by the landscapes of the places involved in the life of his family (the"Village Smoke", "spring water", "Bare Cape", "Lyadova motives", "River"); the series of Perm. urban landscapes - a kind of chronicle of the constantly changing city ("Goznak. A village of Light", "Roof", "City landscape"). Particularly struck V. Dudin pristine beauty of the North. Of the Urals. He first came on the river Vishera in the late 1940s and then to the end of life repeatedly returned to these places, wrote sketches, and then in the Studio working on the paintings, trying to convey the uniqueness of the vast North. spaces, the beauty of mountain ranges, rocky river banks ("view of the Kvarkush", 1949; "the Talkative Stone", 1960; "West of the Urals. Give taiga", 1982). Special sense-filled chamber landscapes Patriarchal North. villages ("Foggy morning. On the Chusovaya river", "Zagovorukha Village", "Settlement on the Chusovaya river"). A series of landscapes created at the end of the travel of the artist, reflect the impressions from nature and architecture of Central Russia, Krasnodar territory, oz. Baikal, Altai Republic, Lithuania and Kyrgyzstan ("morning on the lake Teletskoye", 1974; "the Backbone of Korba", 1974; "klaipėda. Channel", 1967; "Trakai castle", 1967). Of fundamental importance for his work, V. I. Dudin always considered the genre of portraiture. The artist created a gallery of portraits of outstanding figures of the Kama region, as well as plenty of portraits of ordinary working people. Among them Heroes of Socialist Labor D. S. Everyday and Rogachev, V. E.; fitter-lekalschikom, honorary citizen of Perm A. A. Ryzhov; Malyovitsa L. Shishkin, Brigadier malinowitz Z. Burkova. A special place in portrait of the artist's work belongs to the heroes of the great Patriotic war (portraits of the honourable citizen of Perm, twice Hero of the Soviet Union, major-General G. F. Sivkov; Chairman of Perm. section of war veterans A. P. puchnina; Hero of the Soviet Union Colonel-General of aviation M. P. Odintsova; Hero of the Soviet tanker I. A. Kondaurova; veteran of war of Faith Karavaeva). Special warmth and love permeated by his portraits closest and dearest people: my parents, grandparents, wife Nina Mikhailovna children Ludmila and Vladimir. In 1999 the artist gave to his mother S. Karagay more than 60 landscapes and portraits, which are now in the collection of the Karagai Museum (collection of paintings by V. I. Dudin was the beginning of the art division of the Museum). The works of V. I. Dudin are also in the collections of Perm. state art gallery, Perm. regional Museum, museums of Lysva and S. Karagay, Krasnokamsk art gallery.

2 artworks for sale by Valentin Dudin 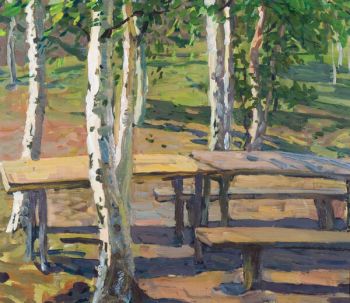 Under the birch trees1968 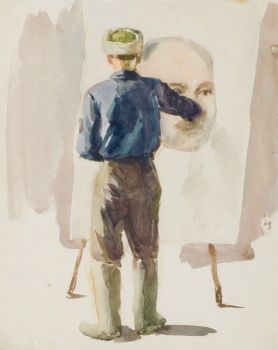 2 Artworks from this artist
24 artworks19 artists
1 - 1 / 1
We use cookies to provide statistics that help us give you the best experience of our site. By using this site without changing your cookie settings, you are agreeing to our use of cookies.
Cookie settingsAllow cookies