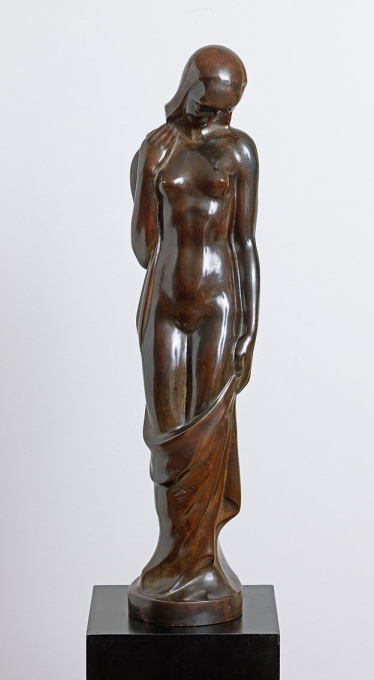 Jan Anteunis was a Belgian artist who was born on 29 March 1896 in Ghent. He died in Ghent in 1973. At the outbreak of the First World War, Anteunis went to England to study sculpture at the art academy in Liverpool. Between 1918 and 1920, he went to the Academie voor Schone Kunsten (State Academy of Fine Arts) where he was apprenticed to Felix Metdepenninghen (1867-1937) and Geo Verbanck (1881-1961). From the 1920s, Anteunis became under the influence of his teacher Geo Verbanck and began working in an art deco style. In this period, Anteunis sculptures became more modern and sober. About 1926 he began developing his mature style which is reflected in the works “Christuskop” and “Droom”. His first solo exhibition was held in “Zaal Pan” in Ghent in 1928. In the 1930s, Anteunis began gradually achieving fame and he exhibited in various galleries in Ghent, Antwerp and Brussels. In the 1930s and 1940s, dance became an important theme in Anteunis’ oeuvre and he created stylised sculptures like “Boléro” or “Prière de Beethoven”. In this period, he made his most important works. Besides his sculptures, Anteunis created various drawings which were shown at numerous exhibitions. In the 1960s, he also became a painter. His sculptures can be found in the museums of Brussels, Sint-Niklaas and Roeselare.