When Gruppe was ten, he moved with his family to Rochester, New York, after the death of his father. Eventually, at age twenty-one, he had earned enough money to travel steerage to Europe, where he traveled through France, Germany, and Holland, searching for a place to settle and practice his art. He was taken with Holland, perhaps attracted to its fishing villages with their picturesque boats and quaint houses, and decided to stay. He built a home and studio in the little fishing village of Katwyk Ann Zee and painted much of his European work in the vicinity of that town.

Altogether, Gruppe spent over twenty years in Holland, becoming a celebrity artist and ultimately being patronized by the royalty of Europe. His work is represented in many museums in America and Europe.

All he did have was a strong love of painting which seemed inborn to him, as it was to generations of his family. He painted thousands of paintings in his life that are in the finest collections of Europe and America.

Charles Paul Gruppe was honored with numerous awards and medals, including gold medals at Paris and Rouen, and two silver medals (watercolor and oil) at the World's Fair in St. Louis in 1903. 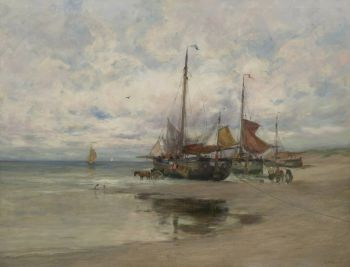