Francois (Franz) Gailliard (Brussels, November 30, 1861 - Saint-Gilles, February 16, 1932) was a Belgian painter, watercolorist, pastelist, graphic artist, etcher and lithographer. He was educated at the Brussels Academy under Jean-François Portaels, Joseph Stallaert, François Bossuet and Paul Lauters. He had some fellow students who would later become very famous: James Ensor, Leon Frédéric and Fernand Khnopff.
In 1887 he became friends with the American painter Whistler, whom he showed around in Brussels. He was the first to use the sprinkle method in 1891. During his travels to Paris and Berlin, he met the most important artists of his time. He allowed himself to be surrounded by artists, musicians and figures from the world of esotericism and occultism. He had wanted to join the Brussels art circle 'Les XX', but was not admitted.

In 1897 he made a portrait of King Chulalongkorn of Siam during his official visit to Belgium.

Gailliard's paintings are characterized first by a neo-impressionist touch and later by a strong luminism.

In 1910 and 1913 he gave an exhibition at the Cercle Artistique et Littéraire.

He was also a reporter for French, English and Belgian weeklies, in which he published drawings from current events. As a graphic artist he immortalized cityscapes of Brussels. With his drawing pen he promoted the initiatives of King Leopold II in the Congo Free State.

He became director of the Academy of Saint-Gilles. One of his students was Wilchar. The street where he lived in Sint-Gillis was later renamed Franz Gailliardstraat. He is buried in the cemetery of Saint-Gilles under a tombstone with a cubist slant depicting a cross and a kneeling figure with outstretched arms. His son is buried not far from it.

In 1957 he was given a retrospective tribute exhibition in the City Hall of Saint-Gilles, organized by the Groupe d'Art Saint-Gillois. His paintings fetch quite high prices at art auctions. Le magasin chinois  was auctioned in 2007 at Christie's in Paris for €6,000. 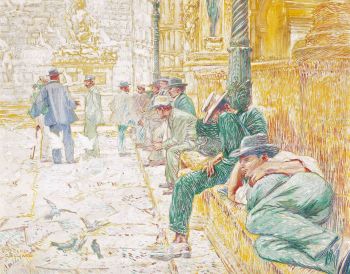