Gertrude Vanderbilt Whitney (New York, 1875-1942), sculptor, patron, society lady, art collector and founder of the famous Whitney Museum in New York. She was one of the richest women in America and of American-Dutch descent. She has meant a lot to the art world in America. She married Harry Payne Whitney (1872-1930) at an early age and they had three children together. Harry Payne Whitney was a... Read more

Gertrude Vanderbilt Whitney (New York, 1875-1942), sculptor, patron, society lady, art collector and founder of the famous Whitney Museum in New York. She was one of the richest women in America and of American-Dutch descent. She has meant a lot to the art world in America.

She has been drawing and painting from an early age. During a visit to Montmartre and Montparnasse in Paris in the early 1900s, she decided she wanted to become a sculptor. This is against the wishes of her husband and family.
Back in New York, she went on to study at the Arts Students League of New York. She had her own studio, 19 Mc Dougall Alley in Greenwich Village and later also studied for some time in Paris where she had a studio in Passy.

She was a great admirer of the works of Auguste Rodin and he later reviewed her work several times, there are also sources that say she had lessons from him.

In a letter to a friend, shortly after meeting her early in her career, Rodin wrote that "he regularly meets foreign artists, including ladies of wealthy descent who make art to please themselves and to impress their friends." , but they do not have the moral courage necessary to free themselves from the prejudices that their environment brings. But the one I've met now is an exception, her name is Gertrude Whitney. She has talent. I think she's going to be a big name. Remember her name and try to follow her exhibits.'

She worked in a realistic natural style. Some works, such as the Titanic Memorial, have symbolist style elements. A central figure stands with his arms outstretched, almost like a crucified man, the sacrifice is beautifully represented, in addition, the graceful lines are also a good example of her style and can be seen in several of her works.

In the 1992 film 'Titanic', the monument is also beautifully portrayed by Kate Winslet who stands on the bow in the same pose, with arms spread.

In addition to her own work as a sculptor, Gertrude also collected art, especially modern art such as the American realists (Ashcan School), she has also been painted several times by various artists. An important work is that of Robert Henri, who painted her sprawled on a sofa in 1916. Her husband refused to hang the painting because she was wearing long trousers, which was too daring.

She supported many young artists and especially many women. Often in silence, she paid their bills, including rent and living expenses, but also doctor's bills or other unforeseen expenses, she wanted them to work carefree. In addition, she expanded her studio with a gallery, the 'Whitney Studio Club', where she organized many exhibitions. She became a real patron, which she continued to do all her life, and she was also the main financier of the "International Composer's Guild", which stimulated modern music.

All this also put herself in a difficult position as an artist.
For her it was important to be taken seriously as an artist, she was a sculptor, that came first for her.
She also exhibited herself, with success, and also received many commissions for statues and monuments. But because of her wealth, it was soon thought that she was in a privileged position and was given commissions because of her fame. That fame certainly helped her early in her career, but soon her work spoke for itself.
It was also assumed by clients that she would do it for free because of her fortune, and when she did, colleagues accused her of causing false competition. In the end, she always let herself be paid, but didn't always cash the check.

During WWI she worked for some time as a nurse at the Red Cross, when she sees how far wounded soldiers have to travel to a hospital, she sets up a hospital at the front. She was decorated for it by the French government.
Having seen a lot of misery up close, her monuments were made from a different perspective than usual, showing less heroism and victory, but more emphasizing the suffering and everyday life of the soldiers.

In the late 1920s, when she offered part of her collection, nearly 700 works, to the Metropolitan Museum of Art, it was refused. The director asks her where to put this, he already has a cellar full of that modern junk. Officially it was said that the collection did not belong in a museum because it was art that was not taught at the Academy.

Her answer was the creation of he The Whitney Museum of American Art, which opened in 1931. A museum of modern art. Her children and relatives are still actively involved with the Whitney Museum to this day.

After her death in 1942, the New York Times wrote; 'Mrs H.P. Whitney, Sculptor, Is Dead'. It must have been good for her to receive this recognition.

PS: For those wondering about Gloria Vanderbilt, Gertrude was her aunt and took custody of her after Gloria's father passed away, after a highly publicized lawsuit in 1934. 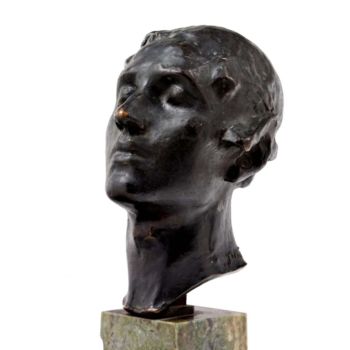 1 Artwork from this artist
39 artworks29 artists1 collection
1 - 1 / 1
We use cookies to provide statistics that help us give you the best experience of our site. By using this site without changing your cookie settings, you are agreeing to our use of cookies.
Cookie settingsAllow cookies