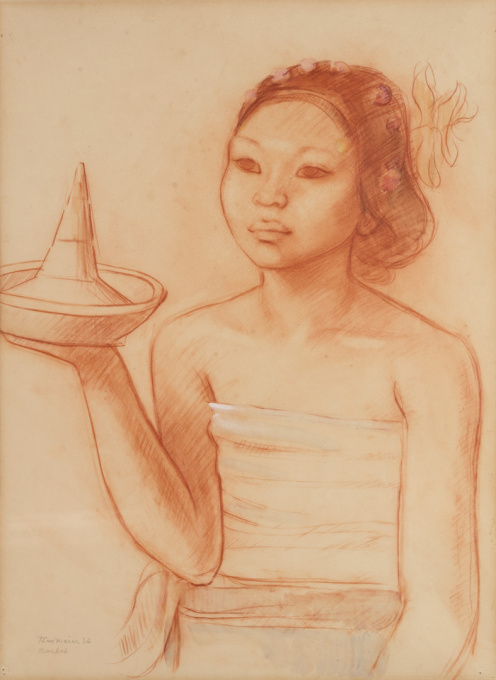 “A Balinese woman with offerings” 1936

“A Balinese woman with offerings”

Signed, dated '36 and annotated Mankok (the name of the sitter) lower left

In a hand-made and hand-painted frame with address: Max Knöll, Herberggasse 4/1, Basel.

​
Note:
Theo Meier was born in Basel, where he attended art school and became a successful portrait painter. However, after visiting an exhibition in Basel of Tahitian paintings by Paul Gaugin, he decided to follow in Gaugin’s footsteps and go to the South Pacific. To finance his voyage, he founded a club in which every member pledged a monthly sum in return of which they could choose one of Meier’s paintings upon his return.

In 1932, at the age of 24, he embarked on his voyage to the South Sea. In Tahiti, he certainly discovered the beauty of the colours of the tropical world but the primitive simplicity of the inhabitants, he had seen in Gaugin’s paintings turned out to be more in the artist’s fantasy than in reality. He returned to Basel but in 1935 again was on his way to the South Sea. In 1936 he arrived in Bali, planning to stay there for two or three weeks, but thirty years later he was still there. In Bali “a delirium laid hold of me which even today has not subsided”, he was to write much later. The present drawing was made during his first “delirius” year in Bali. In Bali, he settled and found inspiration and friendship with other artists including Walter Spies, who guided Theo to a deeper understanding of Balinese culture and invited him to his small mountain retreat in the village of Iseh (for a beautiful painting of Iseh by Meier see Uit Verre Streken, March 2018, nr. 60). In 1938 he married a young girl from the village, Ni Madé Mulugan, and in June 1939 his first daughter was born. In 1941 he divorced Ni Madé and a year later remarried his favourite model, Madé Pegi.
During the Japanese occupation of Indonesia and the subsequent war of independence, Theo lived in Iseh with Madé Pegi who bore him his second daughter in 1948. In 1950, for the first time in 15 years, Theo went back to Basel to sell paintings and get some money to support his family in Bali. When he returned in 1952, he found Madé Pegi in love with a Balinese dancer, and they divorced. In December 1955, two years before Sukarno decreed that all foreign residents had to leave the country, Theo went back to Switzerland where he had several financially successful exhibitions. In 1957, on the invitation of his friend Prince Sanidh Rangsit, Theo moved to Thailand. In 1966 he returned to Bali for the first time in many years and purchased land in Iseh to build a house.

Theo Meier was a Swiss artist from Basel who was especially active in Bali and Thailand. He studied at the Academy of Fine Art in Basel and started his artistic career after receiving an allowance from the Academy. After a successful commissioned portrait, Meier was able to travel to Berlin where he met artists such as Emil Nolde, Max Lieberman and Otto Dix, who taught him a lot about painting techniques.

Inspired by Gauguin, Meier traveled to Tahiti at age 24. He returned desilllusioned however after not having found the primitive way of living he had hoped to see with his own eyes. A year later, Meier went to Bali. He was immediately struck by the beautiful island and it's culture. He settled in Sanur, met other artists on the island and got married relatively quickly in 1936 with a Balinese woman. During the Japanese invasion in the Second World War, Meier was allowed to stay in Bali for Swiss was a neutral state, but a lot of his works were confiscated and lost. In the 1950s, Meier returned to Switzerland for a short period of time. In 1957, he traveled to Thailand, where he would settle in Chiang Mai for the rest of his life, painting the local landscape and people.

Theo Meier worked in a colourful style, resembling Gauguin and the Fauvists. His work can be seen in multiple collections and museums over the world.