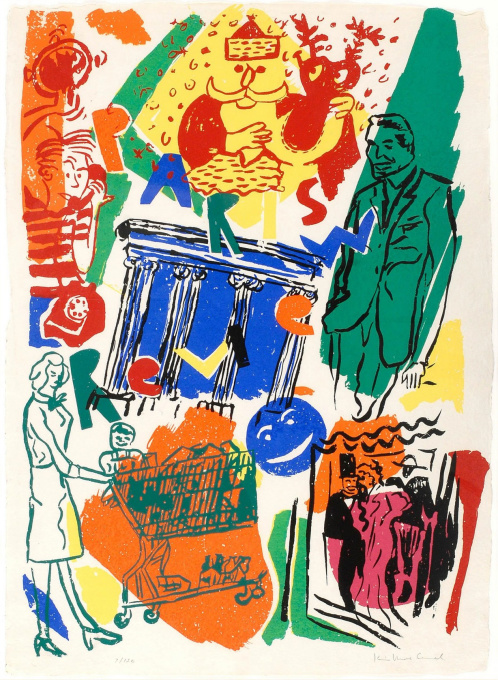 Since 1964, The Paris Review has commissioned a series of prints and posters by major contemporary artists. Contributors have included Andy Warhol, Helen Frankenthaler, Louise Bourgeois, Ed Ruscha, and William Bailey. Each print is published in an edition of sixty to two hundred, most of them signed and numbered by the artist. All have been made especially and exclusively for The Paris Review. This print is by Kim MacConnel (born 1946 in Oklahoma City, Oklahoma) he is an American artist who works with painting, sculpture, and mixed media-collage/fabric. MacConnel is a seminal figure in the Pattern and Decoration movement of the seventies.

Kim MacConnel is an American artist who works with painting, sculpture, and mixed media-collage. He was born in Oklahoma City (Oklahoma) in 1946. He moved to California, attending the University of California in San Diego where he received his BA with honors and a pre-doctorate fellowship. He taught at the University from 1977 and became professor in the Visual Arts Department in 1987 where he remained until 2006. He currently lives in Encinitas (California). MacConnel is one of the founding artists of the Pattern and Decoration movement of the 1970s. Collection Applied Design in 1976 was MacConnel’s ﬁrst solo exhibition and was also his breakthrough in the United States. His work is in numerous public collections including the Brooklyn Museum in New York; Museum of Contemporary Art in Chicago; National Gallery of Art in Washington; San Francisco Museum of Modern Art and the Whitney Museum of American Art in New York. MacConnel's paintings, drawings and sculpture have been exhibited in museums and galleries around the world, amongst others the Whitney Biennials (1975, 1977, 1979), the Museum of Modern Art in New York and the Rosamund Felsen Gallery in Los Angeles.