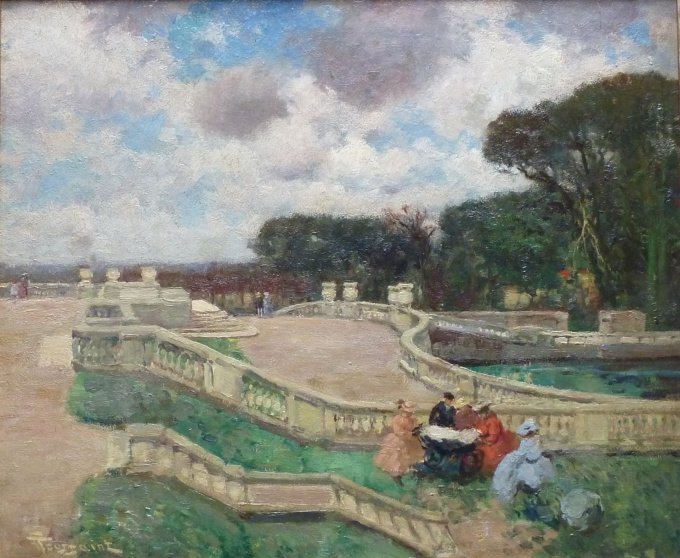 Fernand Toussaint (1873, Brussels – 1956, Elsene/Ixelles, a suburb of Brussels) was a Belgian painter, born into a cultivated Brussels family. At the age of 15, he entered the Académie Royale des Beaux-Arts (Royal Academy of Fine Arts) in Brussels, where he studied under the celebrated portrait painter Jean-François Portaels from 1889 to 1894. Portaels was the first Belgian Orientalist painter to have travelled around the Middle East. Toussaint completed his artistic training in Paris, where he received his education by the renowned Belgian portraitist Alfred Stevens (a friend of Edouard Manet and Edgar Degas), who integrated Japanese elements into his works. He became a member of the group Sillon and participated in exhibitions of La Libre Esthétique.

Toussaint was first of all famous for his female portraits. His models were dressed in the latest fashion. He was awarded the golden medal for the portrait of a lady at the Salon des Artistes Français in Paris in 1929. Toussaint painted beautiful floral still lifes and interiors too. The sober interiors are clearly inspired by the Art Nouveau, and Japanese motifs are often visible in the background of his paintings. Toussaint’s cityscapes, landscapes, and seascapes show influences by Constant Permeke and Adriaen Le Mayeur de Merprès. Fernand Toussaint also was active as an engraver and draughtsman of posters. He is one of the most important Post-Impressionist Belgian painters of the 20th century.