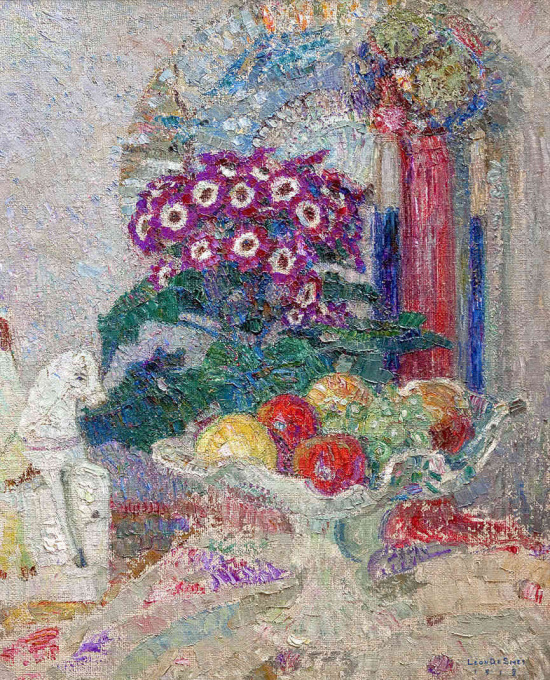 Léon de Smet (1881, Ghent, Belgium – 1966, Deurle, Belgium) was a Belgian luminist, impressionist, expressionist and pointillist painter. Léon and his brother Gustave (1877-1943) studied at the Academy of Fine Arts in Ghent in 1893. Léon became an admirer of Emile Claus and the Luminist School (influenced by Impressionism). He first exhibited in Ghent and Antwerp in 1901 and in Brussels in 1903. He became a member of Vie et Lumière, a circle of luminist and impressionist artists, founded in 1904. Léon joined the second Latem School, a group of artists who settled in the region of Sint-Martens-Latem around 1905. They greatly influenced modernistic movements in Belgium. In this period Léon became friends with the artists Valerius De Saedeleer, Maurice Sys, Constant Permeke, Frits van den Berghe, Gustave van de Woestyne. By 1909, De Smet was representing Belgium at the Venice Biennale. In 1910, he participated in an international exhibition in Brussels along with Pierre Bonnard, Édouard Vuillard and James Ensor. At the beginning of World War I Léon fled to Great Britain, where he became a celebrated artist. He had an exhibition at Leicester Gallery in 1917. After returning to Belgium in 1920, he had a large exposition at Galerie Georges Giroux in Brussels. De Smet continued to exhibit widely throughout the 1920s and 30s in Ghent, Antwerp, Brussels, Paris, Amsterdam and Pittsburgh. In 1930 the artist moved to Deurle. The Museum voor Schone Kunsten in Ghent honoured him with a special exhibition in 1953. There is a Museum Léon de Smet in Deurle (Belgium). Many of his paintings are in the Groninger museum in Bruges and in the Koninklijk Museum voor Schone Kunsten in Antwerp.

We really like his painting very much. Especially if you take a closer look at the different layers of paint which makes it almost a 3-d object. The very intense and bright colours make a contrast with a traditional quiet 'still life'.