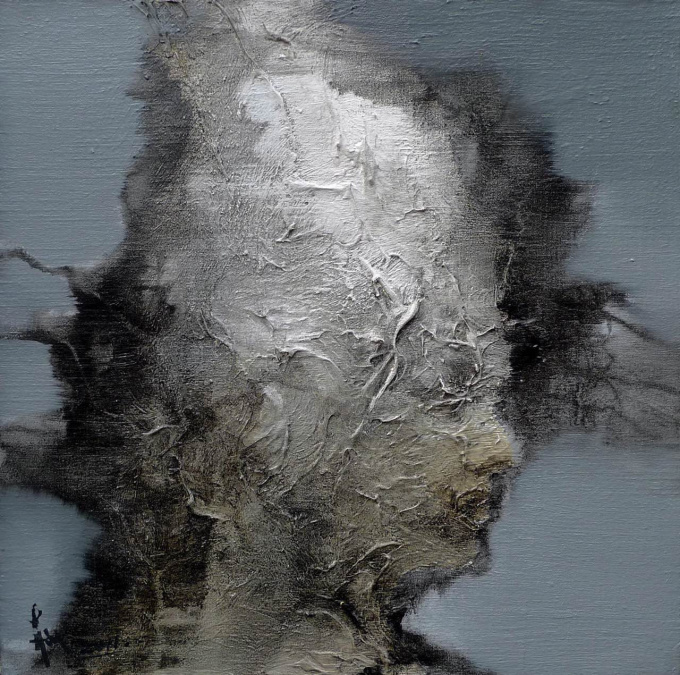 The works of Liao Zhenwu are also characterized by the distinct local Chengdu features. His early works could be divided into two types: one was to represent the teahouses and things happening there in the small town of Sichuan and the other was to describe the motorcycles running here, there and everywhere. Teahouse culture is distinct in Sichuan from that of other places and is characterized by tranquility, elegance and relaxation. In Sichuan, teahouses are full of hubbubs and vivacity, where people play board and card games, make fun of each other or even gamble by playing a kind of poker. Teahouses here cater largely to common and average people, where people of all social sectors with the same interest and tastes gather together to kill their time. Therefore teahouses are the best place to observe the life and activities of people at various social levels in Sichuan. prefers to include a pair of characters in his works.

Liao’s new paintings are free from unified idolized stiff faces and expression. Instead, he attaches importance to representation of the interactive relations among a group of models. Moreover, his way of representation is not influenced by the plane treatment method prevalent in the current art field. As a result, we can see the characters in his works are all like sculptures, with no efforts made to represent the expressions. Sometimes the heads of the characters are even enveloped by clothes-what the artist wants to show us is the materialized world where people’s real natures compromise to the materialized desires. For this purpose, the artist weakens the bodies of models, which seem to be hard as rocks, with his own loose way of representation of lump structures.

Basically Liao Zhenwu chose cool colors of black, white and grey for this series of works instead of reproducing the world with various colors, which, to some extent, shows that the artist tries to convey his ideas about the intrinsic characteristics of the world.

Born in Sichuan Province, China
Studied in the Arts Department of Sichuan Education Institute and the Oil Painting Department of CAFA
Currently lives and works in Beijing, China