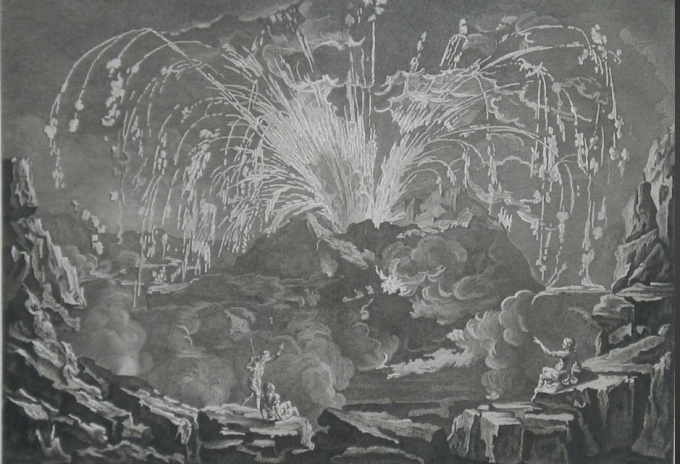 Denis Diderot was a prominent philosopher during the Enlightenment. His most famous work was the groundbreaking Encyclopedia (Encyclopedie), a multi-volume collection of world knowledge richly illustrated with engravings, published between 1751 and 1772.

This plate was engraved by Robert Bénard, a French printmaker born in 1734. It was made after a drawing by Philibert-Benoît De La Rue, who was one of the most inventive of Diderot’s collaborators. The eruption of the Vesuvius in December 1754 coincided with the period in which excavations at Pompeii started, which caused a great interest among travellers on the Grand Tour for the volcano and the cities that were buried under the ashes.

The engraving comes in a beautiful mat and wooden frame.

Denis Diderot ( 5 October 1713 – 31 July 1784) was a French philosopher, art critic, and writer. He was a prominent figure during the Enlightenment and is best known for serving as co-founder, chief editor, and contributor to the Encyclopédie along with Jean le Rond d'Alembert.

Diderot's literary reputation during his lifetime rested primarily on his plays and his contributions to the Encyclopédie; many of his most important works, including Jacques the Fatalist, Rameau's Nephew, Paradox of the Actor, and D'Alembert's Dream, were published only after his death.

Denis Diderot was a prominent philosopher during the Enlightenment. His most famous work was the groundbreaking Encyclopedia (Encyclopedie), a multi-volume collection of world knowledge richly illustrated with engravings, published between 1751 and 1772.
Denis Diderot was born in Langres, Champagne, and began his formal education at a Jesuit collège in Langres.

His parents were Didier Diderot (1685–1759) a cutler, maître coutelier, and his wife Angélique Vigneron (1677–1748). Three of five siblings survived to adulthood, Denise Diderot (1715–97) and their youngest brother Pierre-Didier Diderot (1722–87), and finally their sister Angélique Diderot (1720–49). According to Arthur McCandless Wilson, Denis Diderot greatly admired his sister Denise, sometimes referring to her as "a female Socrates".

In 1732 Denis Diderot earned the Master of Arts degree in philosophy. Then he entered the Collège d'Harcourt in Paris. He abandoned the idea of entering the clergy and decided instead to study law. His study of law was short-lived however and in 1734 Diderot decided to become a writer. Because of his refusal to enter one of the learned professions, he was disowned by his father, and for the next ten years he lived a bohemian existence.

In 1742 he befriended Jean-Jacques Rousseau. In 1743 he further alienated his father by marrying Antoinette Champion (1710–96), a devout Roman Catholic. The match was considered inappropriate due to Champion's low social standing, poor education, fatherless status, and lack of a dowry. She was about three years older than Diderot. The marriage in October 1743 produced one surviving child, a girl. Her name was Angélique, after both Diderot's dead mother and sister. The death of his sister, a nun, from overwork in the convent may have affected Diderot's opinion of religion. She is assumed to have been the inspiration for his novel about a nun, La Religieuse, in which he depicts a woman who is forced to enter a convent where she suffers at the hands of the other nuns in the community.

Diderot had affairs with Mlle. Babuti (who would marry Greuze), Madeleine de Puisieux, Sophie Volland, and Mme de Maux. His letters to Sophie Volland are known for their candor and are regarded to be "among the literary treasures of the eighteenth century."

Though his work was broad as well as rigorous, it did not bring Diderot riches. He secured none of the posts that were occasionally given to needy men of letters; he could not even obtain the bare official recognition of merit which was implied by being chosen a member of the Académie française. When the time came for him to provide a dowry for his daughter, he saw no alternative than to sell his library. When Empress Catherine II of Russia heard of his financial troubles she commissioned an agent in Paris to buy the library. She then requested that the philosopher retain the books in Paris until she required them, and act as her librarian with a yearly salary. Between October 1773 and March 1774, the sick Diderot spent a few months at the empress's court in Saint Petersburg.

Diderot died of pulmonary thrombosis in Paris on 31 July 1784, and was buried in the city's Église Saint-Roch. His heirs sent his vast library to Catherine II, who had it deposited at the National Library of Russia. He has several times been denied burial in the Panthéon with other French notables,but the French government did recently announce the possibility of memorializing him in this fashion, on the 300th anniversary of his birth (October 2013). This idea seems to have been shelve.