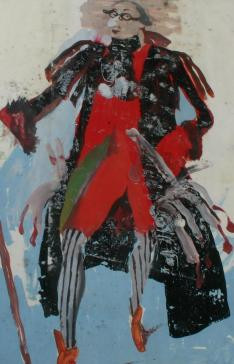 John 'Patrick' Byrne was born on January 6th, 1940 in Paisley, Schotland. He was educated at St Mirin's Academy in Renfrewshire, before applying to the Glasgow School of Art, where he studied between 1958 and 1963. After his mother had passed away, Byrne was informed by a family member that he was the product of an incestuous relationship between his mother Alice and his grandfather, Patrick McShane. Byrne was married to actress Tilda Swinton from 1989 to 2003 and the couple have two children together.

Byrne is best known as a playwright and television writer, although is an artist as well. Between 1964 and 1966 he designed covers for Penguin Books. Later, driven by multiple unsuccessful experiences with London galleries he released a series of works under the pseudonym of 'Patrick'; as if these were created by his father, who was a self-taught painter. When these images obtained some success, his painting career commenced. After this Byrne worked on stage designs, record covers, illustrations of stories, and an even greater number of paintings. His most recent exhibitions were/are being held by/at: Open Eye Edinburgh, Bourne Fine Art Edinburgh and the Fine Art Society London.