Giselle van Essen Kuster was a Dutch painter and draftsman. She mainly painted figure representations and self-portraits, and worked in Venlo, Leiden, Malang (Indonesia), Maastricht and Ibiza. She was educated at the Académie des Beaux-Arts de Saint-Luc (Liège). Van Essen-Kuster was a member of the Professional Association of Visual Artists... Read more

Giselle van Essen Kuster was a Dutch painter and draftsman. She mainly painted figure representations and self-portraits, and worked in Venlo, Leiden, Malang (Indonesia), Maastricht and Ibiza. She was educated at the Académie des Beaux-Arts de Saint-Luc (Liège). Van Essen-Kuster was a member of the Professional Association of Visual Artists BBK.

Giselle Kuster was an only child and was pampered by her parents. This indulgence also included drawing and painting lessons. In the early 1930s she was taught by the Hungarian artist László Hernadi Vandzsura, who lives in Venlo, and shortly afterwards from the Venlo painter Sef Moonen. Because she soon had enough of them, she went to Liège at the end of 1934, where she went on to study design at the Academie des Beaux Arts. After a little over a year, she gave up and returned to Venlo.

Giselle Kuster established herself in her birthplace as an independent artist, illustrator and designer. She earned her money by illustrating for newspapers (including De Maasbode and the Nieuwe Venlosche Courant) and magazines. She also designed logos, did advertising work for companies and made fashion drawings. She also painted free work. Initially she was influenced by Picasso and Braque, but soon she opted for expressionism. She hardly exhibited: only occasionally did she participate in a group exhibition.

From 1935, Giselle Kuster got to know many artists and musicians through the Venlo art circle De Blauwe Bloem. In her studio behind the parental home she held a kind of salon where writers, journalists and artists from North Limburg met, but that came to an end when Kuster and her parents moved to Leiden in February 1940 because of the threat of war. In their home on the Breestraat, Giselle Kuster started a gallery: Pro Arte. There she mainly exhibited and sold her own paintings, but she also regularly held exhibitions by artists such as Charley Toorop, Otto van Rees and Jan Sluijters. In the last year of the war she exchanged her work for food with farmers from the area

In Leiden, Giselle Kuster met Carl van Essen, a medical student from the Dutch East Indies. She married him immediately after the liberation. In the early post-war years, inspired by Charley Toorop, she mainly painted portraits, which art critics praised. She exhibited the canvases at group exhibitions in Leiden, partly organized by herself. In 1948 Kuster left for Indonesia, where her husband had been stationed as a military doctor a year earlier. Enraptured by the colours, she painted and drew an enormous amount in the two years of her stay – especially Indonesian women, whom she depicted in a Gauguin-esque way. She also made commissioned portraits of Dutch people. At the end of 1949, the couple returned to the Netherlands because Carl van Essen wanted to specialize as a psychiatrist.

When Giselle's husband was appointed as a psychiatrist in the mental health service in Limburg in 1951, the couple moved to Maastricht. In her studio she first processed her Indonesian impressions and mainly painted the women she had seen there. Later she became interested in the flower still life. Her marriage ended in 1955. That same year, Giselle Kuster moved to the Spanish island of Formentera, where she began a relationship with the German poet and writer Ernesto Ehrenfeld (1910-1978). She made a living selling fast-paced paintings and drawings of traditionally dressed native women, portraits of island children, and the rather specific dogs (with pointed snouts and big ears) of the island. With one of her paintings she won a Spanish art prize and with another she ended up on the front page of the regional newspaper. However, a few years later, she was banned from the island forever for sunbathing naked, which was still illegal at the time.

In the early 1960s, Giselle Kuster (without Ehrenfeld) settled in Maastricht again. She continued to paint, but had a lower production. She mainly made flower still lifes, but also Ibizan scenes and paintings of autostradas, which fascinated her after a visit to Italy. She also made commissioned children's portraits. She rarely exhibited anymore – she didn't attach much importance to it.

On September 7, 1972, Giselle Kuster died of cancer at the age of 61, in a clinic for women's diseases in Heerlen. 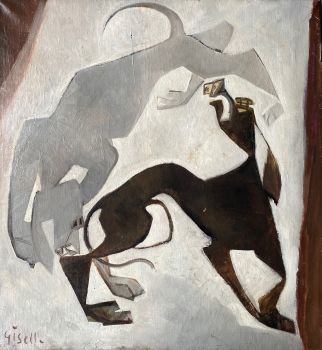