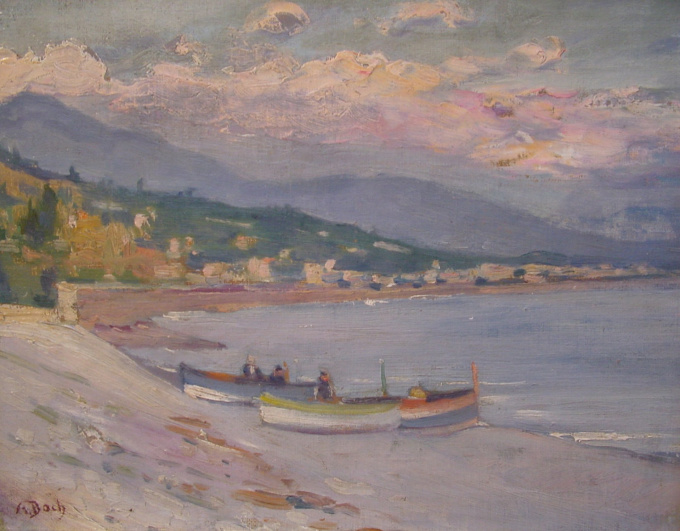 The Belgian artist Anna Boch (1848-1936) was the older sister of the painter and poet Eugene Boch (1855-1941), who was a close friend of Vincent van Gogh.
Anna Boch got to know Vincent van Gogh through her brother Eugene, and she became famous as ‘the only one who ever bought a painting of Vincent van Gogh during his lifetime’.
She was also a very gifted painter herself. She made her debut in 1880 on the Brussels Salon and joined in 1885, as the only female member, the art circle Les XX (Les Vingts/The Twenty) founded by her cousin Octave Maus, where she met artists such as James Ensor, Jan Toorop and Theo van Rysselberghe.
The latter inspired her to make her paintings brighter, which led to her preference for landscapes, sunny beaches, the Belgian coast and the coast of Brittany. The most succesful part of her life was when she started using more powerful, contrasting colors. By doing so she evolved into the direction of the avant-garde style of Fauvism, which is reflected in this small oil-sketch of a 'Breton coast’.

Anna Rosalie Boch was a Belgian painter, born in Saint-Vaast, Hainaut in 1848.

Boch participated in the Neo-Impressionist movement. Her earlier works used a Pointillist technique, but she is best known for her Impressionist style which she adopted for most of her career. A pupil of Isidore Verheyden, she was influenced by Théo van Rysselberghe, as they were both part of the Groupe des XX.

Besides her own paintings, Boch held one of the most important collections of impressionist paintings of her time. She promoted artists including a young Vincent van Gogh, a friend of her brother, whom she admired for his talent and who was a The Vigne Rouge (The Red Vineyard), purchased by Anna Boch, was long believed to be the only painting Van Gogh sold during his lifetime. The Anna Boch collection was sold after her death. In her will, she donated the money to pay for the retirement of poor artist friends.

Her name is associated with famous museums like the Pushkin Museum in Moscow, the Musée d'Orsay in Paris or the Van Goghhuis in Zundert, the Netherlands.