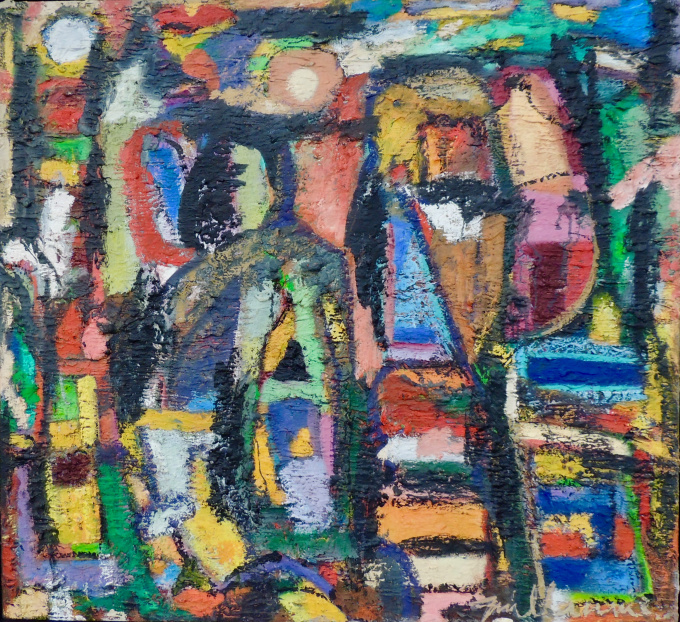 Guillaume Theodoor Lo-A-Njoe is a Dutch visual artist working in Amsterdam-North. He is of Surinamese descent. Inspired by Cobra, Lo-A-Njoe developed a style of expression in line with it and characterised by a powerful and colourful palette. His style is akin to Expressionism and can be seen as post-Cobra, with Oskar Kokoschka and Marc Chagall as sources of inspiration. Colour and expression are important to him.

Lo A Njoe stretches his canvases himself, carpenters and prepares them with rabbit glue and tempera. In his experience, this already gives rise to a work of art, which the painter gradually brings to life with oil paint. His working method is direct, with emotion and temperament. In various publications, such as the one mentioned below, his work is seen as post-Cobra, on which dynamic expressive style Lo A Njoe has continued, with his own signature. His work consists mainly of paintings, mostly oil on canvas, but also of gouaches, wooden sculptures and objects and screen prints.Lo A Njoe's parents came to Amsterdam from Suriname in 1936. A year later, Guillaume was born in Amsterdam.

He sees himself as an international visual artist, with roots in the Netherlands, Suriname, India and China. Lo a Njoe is largely self-taught, but did receive art education at the Kunstnijverheidsschool, one of the precursors to the Gerrit Rietveld Academy.

In 1958 he received the Royal Grant for the Art of Painting and had his first exhibition in café Eijlders on the Leidseplein in Amsterdam. In the 1960s and 1970s, he made a number of study trips to countries including India, Morocco, Mexico and the Caribbean.

He is represented at the Stedelijk Museum Amsterdam, Cobra Museum Amstelveen, Gemeentemuseum The Hague, Surinaams Museum Paramaribo, The Curaçaosch Museum and Instituut Collectie Nederland, among others. Lo A Njoe has also worked as a commissioned artist. He designed the monument for the SLM disaster in 1989 and made the plaque for Surinamese nationalist and resistance fighter Anton de Kom, who died in a Nazi concentration camp. In 2008, Lo A Njoe celebrated his fiftieth anniversary as an artist in Amsterdam with a major retrospective.

Lo-A-Njoe prepares his canvases self with rabbit glue and tempera. The painter gradually brings it to life with oil paint. His working method is direct full of emotion and temperament using a powerful colourful palette. His style is expressionistic and can be seen as post-Cobra, with Oskar Kokoschka and Marc Chagall as sources of inspiration. His work can currently be admired in the ‘Stedelijk Museum’ in Amsterdam.