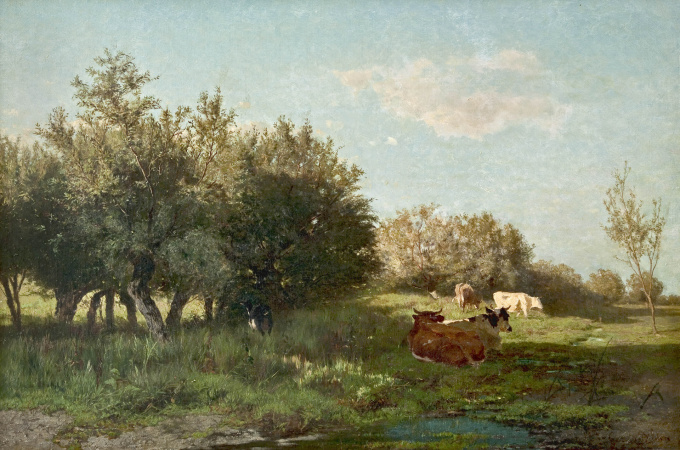 The 'Uiterwaarden' at Oosterbeek (flood plains) 1861

This painting reveals the inspiration the artist got from French landscape painters. The trees are used as repoussoir. Because of this play with light and shadow, the attention of the viewer automatically draws to the resting and grazing cows. It is known Bilders set up this painting in the open fields and worked out any detail in the comfort of his own studio. In contrast with contemporaries as Anton Mauve, who had a preference for grey landscapes, Bilder's work contains a light and airy atmosphere.

Gerard Bilders (1838-1865) was born in Utrecht. He received his first drawing lessons from his father, landscape painter Johannes Bilders. During much of Gerard's youth the Bilders family lived in Oosterbeek, a village near Arnhem to which many painters were later attracted. Landscapes were Bilders’s main interest from the start. He moved to The Hague in 1857, where he copied Paulus Potter’s landscapes with cattle at Mauritshuis museum. He also visited Switzerland, where he studied under landscape and animal painter Charles Humbert.

Bilders often went to Oosterbeek to paint outdoors in the summer, together with artists such as Anton Mauve and Paul Gabriel of the Hague School. They tried to capture the atmosphere of the landscape, like the Barbizon School painters in France whom they admired. Bilders died at 26 of tuberculosis.