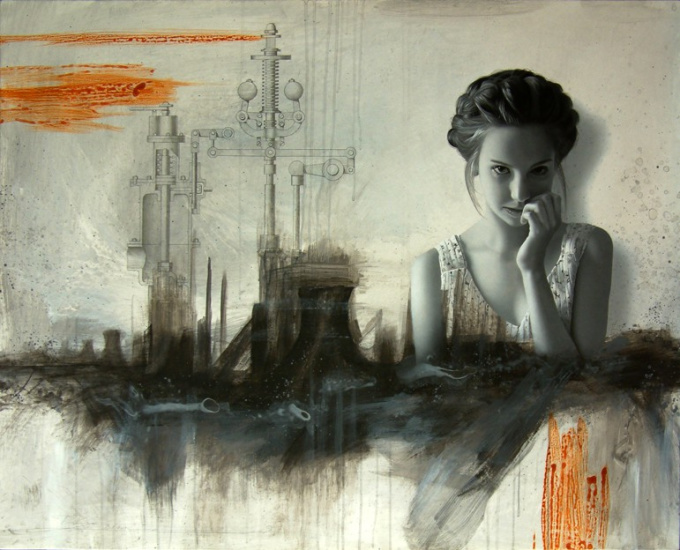 Roger Braun, born in 1972, grew up in the miner’s town of Eygelshoven, the Netherlands where his family worked in the mines for generations. This background would later be the source of inspiration for most of his work.

Braun studied Illustrative Design at the Hogeschool Katholieke Leergangen in Sittard, the Netherlands from 1993-1997. He lived and worked in Sittard, Nijmegen, Valkenburg aan de Geul and Vlodrop. After graduating he started an intensive self-study on the techniques used by the old masters. In order not to stay in the past and forced by developments on the old master’s techniques Braun mixed the old techiniques with contemporary techniques and materials.

Together with Sander van Wijnbergen he founded the painter’s guild Renasa in 2001. Goal of this guild was to offer a platform for mixing knowledge on different painting techniques and materials. Startingpoint were the techniques of the old masters.

Apart from mining his subjects are mainly the Indutrial Revolution, the current industrial developments and the part humans play in this. 'Lux Umbram Creat': Light creates Shadow’ is the common theme in his work, a clear Clair-Obscur.

Roger paints in a realistic contemporary fashion but does not show us the visual reality. His art is about the beauty and interpretation of the image. His fascination for industry and humanity remain a recurring subject. Braun offers his viewers a free interpretation.

Roger Braun’s work is part of many international public and private collections in the Netherlands, Germany, Canada, the United States, including the Museum Møhlmann.