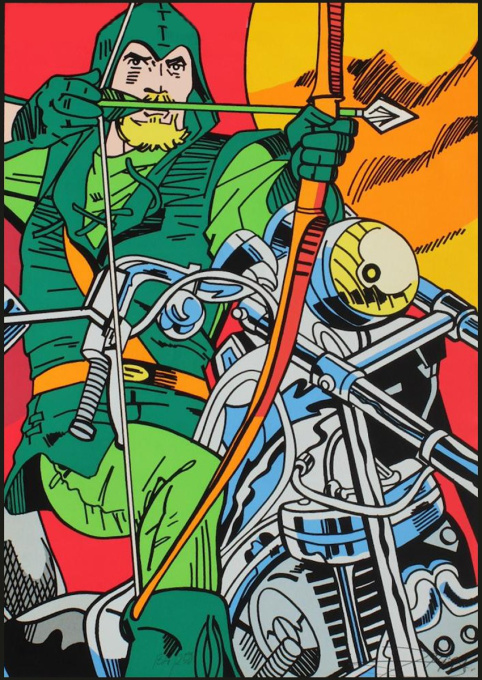 medium: serigraph/silkscreen
signature: lower right in pencil
edition size: 250
This sergraph was created by Erro for the 1992 Barcelona Olympics, commemorating the centennial of the Olympic Games.

“I paint because painting is a private Utopia,” Erró writes of his art.
The landscapes in Erró’s work are a constantly changing kaleidoscope of images, multivalent and mysterious, not infrequently controversial, bursting with life – and titillating, too! There is room in his pictures for both paradise and visions of fear.
Erró is the alias of Gudmundur Gudmundsson, born on 19 July 1932 in Olafsvik, in north-western Iceland. Since Gudmundur first became enthralled by pictures of works of art in a catalogue from the Museum of Modern Art in New York at the tender age of ten, painting has been his passion and his mission in life. He was accepted into art school in Reykjavik as a 19-year old, subsequently complementing what he had learned there with further studies in Oslo. Erró travelled extensively in Spain, Italy, France and Germany in the 1950s, studying at the Florence Academy of Art in 1954 and at the School of Byzantine Mosaic Art in Ravenna in 1955. It was around this time that he began to exhibit his works, first and foremost in Paris, where he chose to make his home in 1958.
During the 1960s he established contact with the Swedish museum director Pontus Hultén, who encouraged him and took him under his wing.
Over the years Erró has taken part in hundreds of exhibitions and today his works are on show in museums all over the world, including the Centre Pompidou in Paris.
Erró’s pictorial world is peopled by comic-strip characters and autocratic despots alike. Donald Duck with his Daisy, Chip & Dale, and other Walt Disney creations are unselfconsciously juxtaposed with Greek gods and madonnas. Elsewhere the German dictator Adolf Hitler stands shoulder to shoulder with his Iraqi counterpart Saddam Hussein, while the Chinese leader Mao Zedong is portrayed in truly monumental proportions.
Erró adopts the same provocative spirit to expose leaders whose propaganda machines advocate dictatorship, conformity and uniformity as he does, in others of his series of pictures, to allow his veiled Oriental women to expose their own breasts. Weapons, violence and sexuality are mainstays among his motifs. Pastiches of Picasso, Léger, Disney and Dalí have also become something of a hallmark for Erró, as he deploys a potpourri of styles and pictorial languages with wilful abandon. Some of the works from his earlier years bear traces of Roberto Matta’s evocatively cosmic creatures, while others resemble the comic strip-inspired paintings and popular culture pastiches produced by his friend, Öyvind Fahlström. But Erró also shares a close kinship with artists like Roy Lichtenstein, Andy Warhol and James Rosenquist.
In the summer of 2001 a museum was inaugurated in Reykjavik dedicated to Erró. Here visitors can see the full breadth of the artist’s work, from his very earliest paintings to those of more recent years.
Observing his art is like fitting together the pieces of a jigsaw puzzle. The images blend, fuse and coalesce. The visual synthesis they create personifies a lusty joie de vivre and a playful vitality that stand in stark contrast to the opposing brutality of dark destructiveness.