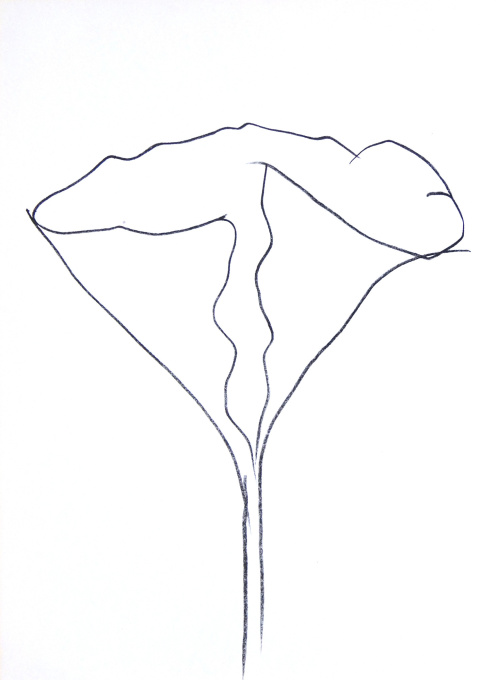 medium: lithograph
edition size, c.1500, unsigned
Original lithograph by Ellsworth Kelly. Contributed to issue 250 of the deluxe art revue Derrière le Miroir; this issue was a homage to the gallerists Aimé and Marguerite Maeght, and contained original prints by many of the artists associated with Galerie Maeght. 150 numbered copies were printed on Arches, plus an unnumbered run on stout wove paper; our proof is from one of these unnumbered copies. The total number of copies printed is not known; Derrière le Miroir was usually printed in a run of 1500 copies.
This lithograph has text on the reverse, with no show-through.

Ellsworth Kelly was an American painter, sculptor and printmaker. He was a student at the Pratt Institute, New York, the École nationale supérieure des Beaux-Arts, Paris and the School of the Museum of Fine Arts, Boston. He had his first exhibition in 1957 and the same year three of his works were selected for and shown at the Whitney Museum of American Art exhibit ‘Young America 1957’. Kelly is considered an essential innovator and contributor to the American art movement. He is associated with Hard-edge painting, in which abrupt transitions are found between colour areas, related to Colour Field painting, a style of abstract painting that emerged in New York City during the 1940s and 1950s, and Minimalism. Kelly lived and worked in New York, where he died at the age of 92.