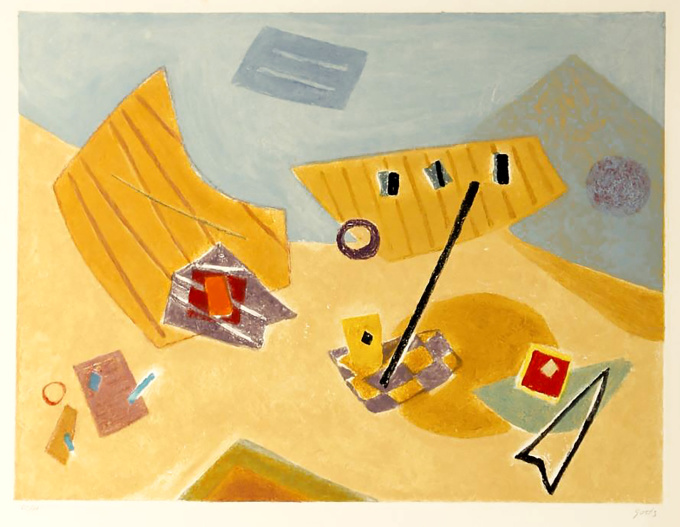 Henri Bernard Goetz was a French American born Surrealist painter and engraver. He is well-known for inventing the carborundum printmaking process. Goetz was born in New York City in 1909. He enrolled at the Massachusetts Institute of Technology in Cambridge, Massachusetts at age 18, where he wanted to become electrical engineer. He started taking evening art classes however and began to paint. He then decided to enroll at Harvard and Cambridge, where he attended art history lectures, hoping to become a museum curator. After realising he actually wanted to become an artist, he left Harvard to attend the Grand Central School of Art in New York City, where he studied full-time.

July, 1930, he left America to go to Paris, France. He attended the Académie Colarossi, the Académie Julian and the Académie de la Grande Chaumière. He began by painting portraits and nudes. He decided to settle in Paris shortly after and met the artist Victor Bauer in 1934, who taught him about Pablo Picasso, Georges Braque and Henri Matisse. He also taught Goetz about Sigmund Freud's ideology, avant-garde poetry and music. Later, around the time he met his wife in 1935, he encountered Hans Hartung, who introduced him to his circle of friends, such as Fernand Léger and Wassily Kandinsky.

Goetz held his first exhibition at the Galerie Bonaparte in 1937. After the Second World War, Goetz visited a new studio each week for a radio program and met with artists such as Pablo Picasso, Wassily Kandinsky, and Max Ernst. In 1949, Goetz began to teach. The class grew so large that he had to move to the Académie Ranson where he would teach for five years. After, he taught for five years at the Académie de la Grande Chaumière. He ended up founding the Académie Goetz, for which he never charged his students money.

Goetz invented carborundum printmaking in the 1960s, with which he would create many abstract prints. Joan Miró and many artists used carborundum printing in their work. The technique is still used by printmakers to this day. Goetz committed suicide by jumping from the fifth floor of a hospital in 1989, leading to his death.