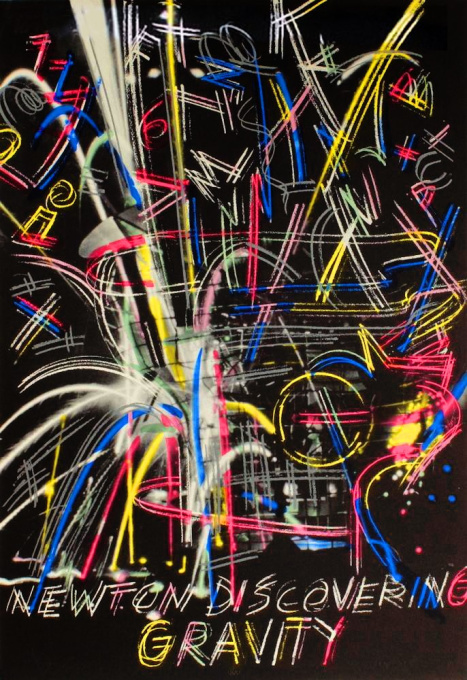 Original lithograph
"Newton discovering gravity". From the 50 original works of the Olympic Centennial Suite, the IOC printed 250 lithographs of each work, all measuring 63/90cm, on Arches vellum paper (270 grams), signed by the artist and numbered.

Dennis Oppenheim recreated, on a two-dimensional support, his artistic installation NEWTON DISCOVERING GRAVITY, made in 1984 in Artpark Lewiston, New York, where artists spent summers creating temporary artworks outdoors. This sculpture was a half transparent head in stainless steal mesh work which was also the platform for a firework extravaganza on 1 August 1984.

The "Olympic Centennial Suite ", brings together 50 works by international artists who are representative of the variety of contemporary artistic tendencies. It was created on the occasion of the centenary of the foundation of the International Olympic Committee in 1994. For the choice of the works, the IOC brought in two prestigious French art critics, Gérard Xuriguera and Francis Parent. More than two years were necessary to constitute this Suite, with the aim of representing, in just 50 works, the multiplicity of creative work produced over the last five decades, from the figurative to the abstract, from hyperrealism to minimalism, from the new figurative school to abstract expressionism, as well as geometrism, conceptual art, and body art. It was decided that each international artist selected should create a work on a two-dimensional support. Some of these artists, aware of the importance of the message of the Olympic Movement, have rendered this spirit a special homage, while always remaining faithful to their own personal style. This "Suite" can be qualified as the jewel of the art collection of The Olympic Museum.

Dennis Oppenheim (1938- 2011) was an American conceptual artist, performance artist, land artist, sculptor and photographer. Oppenheim was born in Electric City, Washington. Soon after, his family returned to their home in the San Francisco Bay area. After earning a Master of Fine Arts (1965) degree from the Stanford University in Palo Alto, Oppenheim moved to New York in 1966, where he was an art teacher at nursery school and high school. Oppenheim had his first one-man show in 1968 at the John Gibson Gallery in New York City. Until his dead he lived and worked in New York City. Oppenheim’s land art included designs that were carved into fields of wheat, and he went on to use his own body in such performance works as Reading Position for Second Degree Burn (1970). Other works include Blood Breathe (1996), two giant inverted noses, and Lightening Bolt Man (2001), a corpse pinned to the floor by a fiberglass lightning bolt. In the 1990s he also began enlarging everyday items, such as paintbrushes and safety cones, to serve as the centerpiece of his installations.