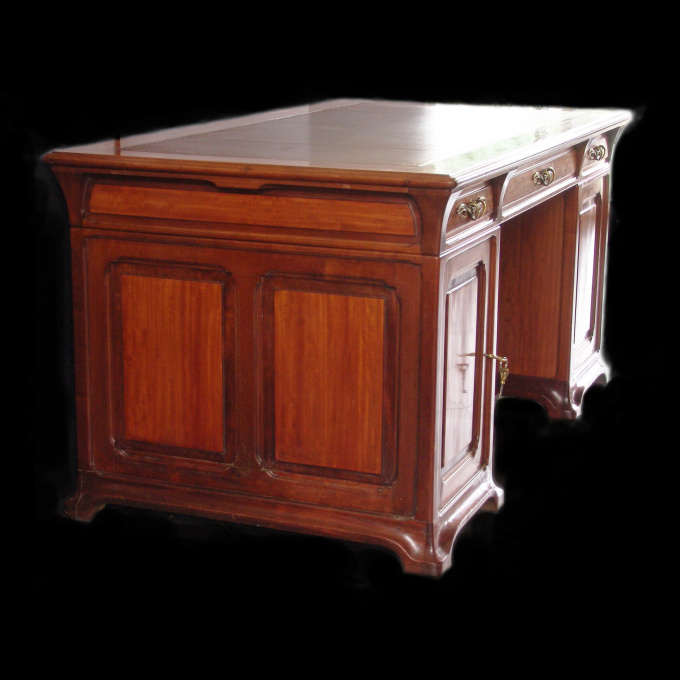 This Writing desk by Louis Majorelle is called "Hemisperes"and made in Nancy around 1900. The style and the bronze handles are perfect art nouveau from the ecole de Nancy, with the original key's . Very good condition.

Louis Majorelle was born the 26th of September in 1859.

He was a French decorator and furniture designer who produced his own designs.
He followed the French tradition of the ébéniste. He was one of the outstanding designers of furniture in the Art Nouveau style, and after 1901 formally served as one of the vice-presidents of the École de Nancy.

After having taken Théodor Devilly’s and Charles Pêtre’s classes at the Nancy Ecole des Beaux-Arts, Louis Majorelle was admitted to the Paris Ecole des Beaux-Arts in 1877 in the studio of painter Aimé Millet. Two years later, the death of his father required him to return to Nancy. With the help of his brother Jules, he took over the family furniture and faience business.

In 1894, after an historically inspired production, Louis Majorelle replaced the varnished and painted technique of the rococo and Japanese styled furniture in favor of an inlaid décor with naturalist and symbolist references. Acknowledged for his cabinetry, Louis Majorelle developed two levels of furniture production: the first concerned luxury furniture, fabricated in Nancy on Rue du Vieil Aître, and the second included the less expensive and mass produced furniture produced from 1905 onwards in the workshops of Pierre Majorelle in Bouxières, close to Nancy. Metalwork was developed in the workshops to create decorative bronze elements for furniture as well as the light fixtures that Majorelle collaborated with Daum since 1898. He had his ceramics produced within different Lorraine workshops and designed models of stoneware ojects for Alphonse Cytère (Rambervillers) and the Mougin brothers. His various activities lead him to open numerous exhibition stores, notably in Paris, Lyon, and Lille.

In 1901, he was the vice president of the Ecole de Nancy.