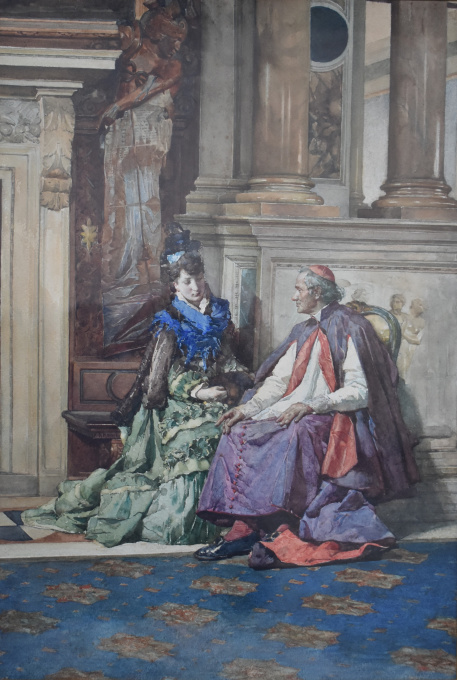 Cesare Maccari was born in Siena and died in Rome. He was an Italian painter and sculptor. His most famous painting was 'Cicerone denuncia Catalin'. He was the pupil of Luigi Mussini in Florence. There in 1864 he was commissioned by an English society to copy works of Bernardino Pinturicchio found in the Cathedral of Siena.
In 1863, Maccari painted Leonardo che ritrae la Gioconda (commonly translated Leonardo [da Vinci] painting the Mona Lisa) which won an award in 1865. In his home town Siena he decorated the Sala del Risorgimento in the public palace with frescoes that were well received by critics.
In later life, Maccari became a lecturer at the Accademia di San Luca in Rome. He became paralyzed while he was working on the Palace of Justice in Rome in 1909 and as a result stopped working as an artist. Among his pupils were Cesare Bertolotti and Giuseppe Aureli. He died in Rome in 1919.