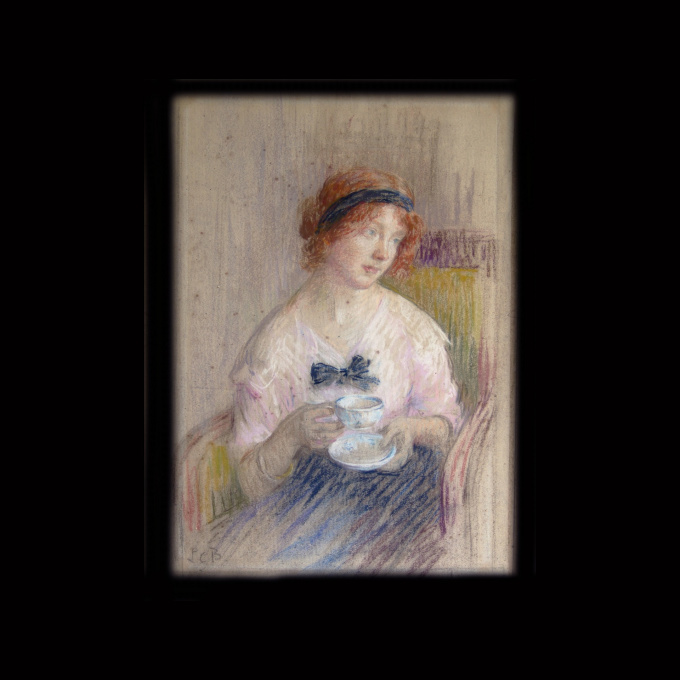 Fine impressionist pastel portrait of a tea drinking lady ( Madeleine Zillhardt ). She was a regular contributor and medal winner at the annual Salon. She was a sought after portrait artist in Paris and befriended with artists like Edgar Degas and Writers like Anatole France.

Louise Catherine Breslau (6 December 1856 – 12 May 1927) was born on the 6th of December in 1856 in Munich.
She was a Swiss artist.
Born as Maria Luise Katharina Breslau into an apparently-assimilated Munich-based German Jewish family of Polish Jewish descent, she spent her childhood in Zurich, Switzerland and as an adult made Paris, France her home (where she also dropped "Maria", perhaps taking "Maria" as inappropriate for a Jew regardless of whether its use is for "Mariam" or "Mary").

She suffered from asthma all her life. This turned Breslau to drawing as a child to help pass the time while confined to her bed. Although she became one of the most sought after portraitists of her time, after her death she and her work were all but forgotten. It has only been in the past few years that interest in Breslau and her works has been growing.

Breslau was born into a prosperous bourgeois family; her father was a well-respected physician specializing in obstetrics and gynecology. When Breslau was two years old, her father accepted the position of professor and head physician of Obstetrics and Gynecology at the University of Zurich; Switzerland became home to the Breslau family. Tragedy hit in December 1866 when Dr. Breslau died suddenly from a staph infection contracted while performing a post-mortem examination.

Lydia Escher (1858–1892) was a childhood friend of Louise Breslau in Zürich, and in her letters she told to take singing and piano lessons, and Lydia was inspired by the creative genius.

After her father's death, Breslau was sent to a convent near Lake Constance in hopes of alleviating her chronic asthma. It is believed that during her long stays at the convent her artistic talents were awoken. In the late 19th century young bourgeois ladies were expected to be educated in the domestic arts including drawing and playing the piano. These were admirable attributes for a respectable wife and mother. Pursuing a career was quite unusual and often prohibited. By 1874, after having taken drawing lessons from a local Swiss artist, Eduard Pfyffer (1836–1899), Breslau knew that she would have to leave Switzerland if she wanted to realize her dream of seriously studying art. One of the few places available for young women to study was at the Académie Julian in Paris.

At the Académie, Breslau soon gained the attention of its highly regarded instructors and the jealousy of some of her classmates including the Russian, Marie Bashkirtseff. In 1879, with a portrait Tout passé, Breslau was the only student from the Académie Julian women's atelier to debut at the Paris Salon. Tout passé was a self -portrait that included her two friends. Shortly afterwards Breslau had changed her name to Louise Catherine, opened her own atelier, and was becoming a regular contributor and medal winner at the annual Salon. Due to her success at the Salon and favorable notice from the critics, Breslau received numerous commissions from wealthy Parisians. She eventually became the third woman artist, and the first foreign woman artist to be bestowed France's Legion of Honor award.

Over the years, Breslau became a well-regarded colleague to some of the day's most popular artists and writers including Edgar Degas and Anatole France. One person who was very special in Breslau's life was Madeleine Zillhardt with whom she spent over forty years. Madeleine, a fellow student at the Académie Julian, became Breslau's muse, model, confidant, and supporter.

During World War I, Breslau and Zillhardt remained at their home outside Paris. Although she naturalised to Switzerland many years earlier, she showed her loyalty for the French by drawing numerous portraits of French soldiers and nurses on their way to the Front. After the war, Breslau retired from the public and spent much of her time painting flowers from her garden and entertaining friends.

In 1927 Breslau died after a long illness. According to her wishes, Zillhardt inherited much of Breslau's estate. Breslau was buried next to her mother in the small town of Baden, in Canton Aargau, Switzerland.