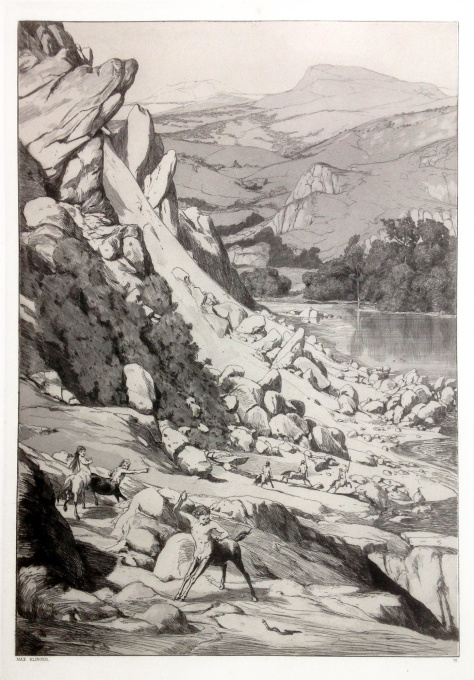 Exhibition:
Boijmans van Beuningen
A Glove: Prints by Max Klinger
28 January – 14 May 2017
The virtuoso German printmaker, painter and sculptor Max Klinger inspired both Giorgio de Chirico and the early Surrealists. In January the Print Room will be exhibiting an unusual series of prints by Klinger from its own collection, with a glove in the leading role.

Max Klinger (1857, Leipzig –1920) was a German symbolist painter, sculptor, printmaker and writer. He studied in Karlsruhe, was an admirer of the etchings of Menzel and Goya, and he became soon a skilled engraver himself. He began creating sculptures in the early 1880s. From 1883–1893 he lived in Rome, and became increasingly influenced by the Italian Renaissance and antiquity. His best known work is a series of ten etchings entitled Paraphrase on the Finding of a Glove (1881). These pictures were based on images which came to Klinger in dreams after finding a glove at a rink. The plates suggest various psychological states or existential crises faced by the artist’s protagonist. Klinger traveled around the art centres of Europe for years before returning to Leipzig in 1893. Since 1897 he mostly concentrated on sculpture; his marble statue of Beethoven was an integral part of the Vienna Secession exhibition of 1902. Klinger was cited by many artists as being a major link between the Symbolist movement of the 19th century and the start of the Surrealist movements of the 20th century.