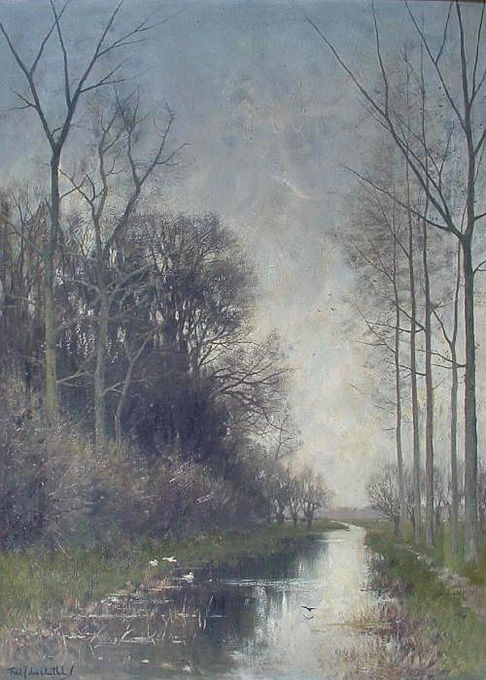 This painting shows a typical Dutch river landscape as it can be found in the polders of the province of Utrecht around the river Vecht. Van Rossum du Chatel loved to paint in this region; it inspired him to paint to the extend that critics called him the ‘the painter of the Vecht’.
He belongs to the second generation of the Hague School.
Oil on canvas, signed left under.
Literature: David C. Preyer, 'The art of the Netherland Galleries', Londen 1908, pag. 293; J.G. van Rossum du Chattel, 'F.J. van Rossum du Chattel 1856-1917', Venlo 2006,

The Vecht river region in Utrecht inspired F.J. van Rossum du Chattel to paint countless impressions, to the extent that critics called him ‘the painter of the Vecht’. He also painted the landscape around The Hague. Born in Leiden in 1856, he received his first lessons in painting from his father, Jan Hendrik van Rossum du Chattel. Thereafter he attended the Teekenschool in The Hague and worked for the Hague Impressionist Willem Maris at the latter’s studio.

Though clearly shaped by the Hague School, Van Rossum du Chattel would evolve a wholly individual and recognisable style.