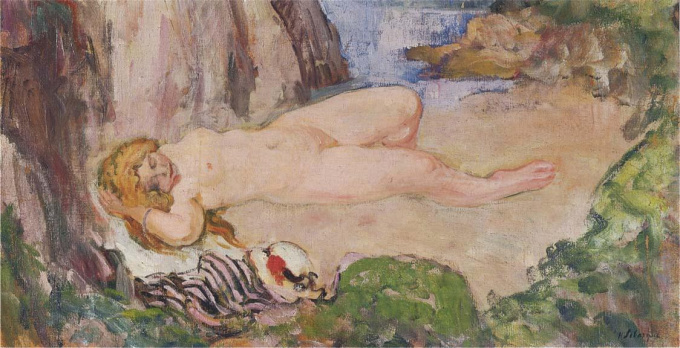 Famed as a painter of joy and light, Lebasque is admired for the intimacy of his subject matter and his unique delight in colour and form.

Born in Champigné, Lebasque first trained in Angers at the School of Beaux-Arts and from 1886 onwards in Paris. Then he entered the atelier of the portraitist Leon Bonnat and began to exhibit at the annual art society exhibitions and the Paris Salons. He later assisted Ferdinand Humbert with the decorative murals of the Pantheon. In 1893, Henri Lebasque met Luce and Signac, and adopted pointillism for a few years.
Living in the 1900's in Lagny, he painted the woods and the bridges at the river Marne. It is from here that he discovers the south of the France that will operate as a radical transformation of his painting, modifying his sensible palette.

Lebasque's vision was coloured by his contact with younger painters, especially Vuillard and Bonnard, founders of the 'Nabis' group and 'Intimists' who first favored the calm and serenity of domestic subject matter. From his first acquaintance with Seurat and Signac, he learned the significance of color theory which stressed the use of complementary colours in shading.
Lebasque participated in the Parisian collective exhibitions: Salon des Indépendants, Salon des Artistes Français, and Salon d'Automne of which he is the co-founder and member until his death.

Lebasque also meets Matisse, Rouault, Dufy, Valtat and Manguin, it is from Manguin whom he discovers the south of France.
In 1924 he moved to Le Cannet on the French riviera, where he shared a model with his friend and neighbor Bonnard.
He died at Le Cannet, Alpes-Maritimes in 1937 and in the same year a group of his works were shown at the Exhibition of the Maîtres d'Art Indépendants at the Petit-Palais. In 1957 a great retrospective exhibition is organised at the Musée des Ponchettes in Nice. Painter of light, colorist and designer, Henri Lebasque expresses in his art his zestful vision of life.