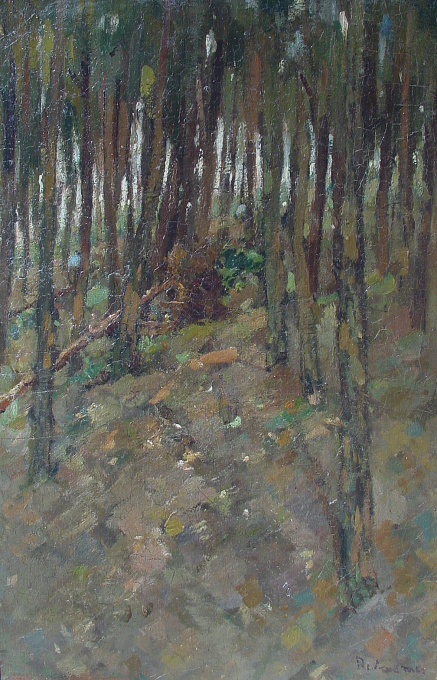 Jacob Ritsema (1869, Haarlem – 1943, N.-H.), full name Jacob Coenraad Ritsema, was a Dutch painter belonging to The Hague School. His father was a lithographer and printer. Jacob studied at the Staatliche Kunstakademie, Düsseldorf (Germany) from 1884 to 1889. After returning to Holland, he took painting lessons from Paul Joseph Constantin Gabriël. Shortly after 1900, he opened a studio in Haarlem, where he cooperated with his sister Coba, who was a painter too. In 1911, he married Alijda van den Broeck and moved to The Hague. In 1922, he returned to Haarlem. Ritsema painted village views and cityscapes, church interiors, landscapes, portraits and still lifes. He was active in the period 1889-1943. He lived and worked among others in ‘s- Graveland, Kortenhoef, Scheveningen, Elspeet/Nunspeet. He also travelled around France and Italy. From 1938 to 1943 he lived in Laren. Ritsema was awarded the Ritsen van Collen Prize. He was a member of Sint Lucas, Amsterdam; Arti et Amicitiae, Amsterdam; the Haagse Kunstkring, and Pulchri Sudio, The Hague. His works are in the collections of the Haags Gemeentemuseum and the Stedelijk Museum, Amsterdam.