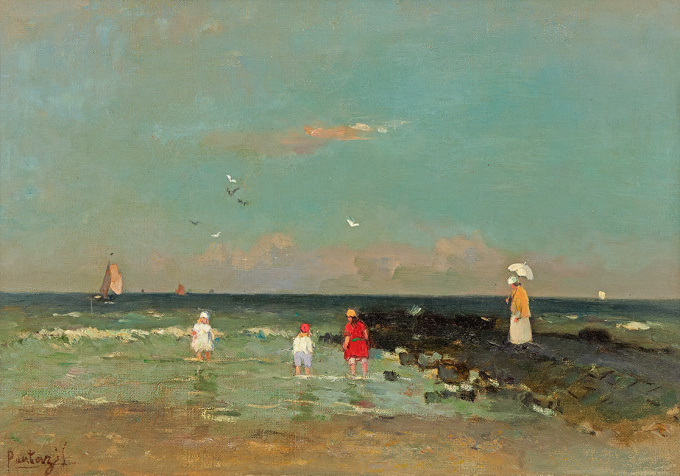 At the Beach;
Oil on canvas,

Pantazis was a Greek impressionist painter.

He studied at the Athens School of Fine Arts (1864-1871) and after a brief stay in Munich, where he enrolled at the Academy, and in Paris, he finally settled in Brussels in 1872. There he became friends with the painter Guillaume Vogels and joined up with the avant garde movements of the time. He took part in many exhibitions in Belgium (Ghent, Brussels, Antwerp, Namur, Charleroi) while in 1878, at the International Exhibition of Paris, he participated in the Greek division. The same year the Artistic and Literary Circle of Brussels organized his solo show. In 1880 he travelled to southern France and Greece, where he took part in the exhibition at the Melas House in Athens (1881). He returned to Brussels at the beginning of 1881 and a little later the first symptoms of tuberculosis appeared, an illness that was to take his life. In Belgium he was a founding member of the Circle of Chrysalis (1875) and participated in its exhibitions (1876-1878, 1881), the Circle of Water Colorists and Engravers (1883) and the Circle of XX , at the first exhibition of which, at the beginning of 1884, a few days after the painter’s death, his works were included. Retrospective exhibitions of his work have been presented at the Town Hall of Saint-Gilles in Brussels (1993), Namur (1994), the Gallery E. Averoff in Metsovo and the National Gallery (1996).
His creative work includes scenes from daily life, still lifes, portraits and landscapes. Developing innovative themes he showed through his multifaceted work, which reflected the artistic quests of the period in a condensed form, that he was one of the leading figures of modernism at the end of the 19th century.