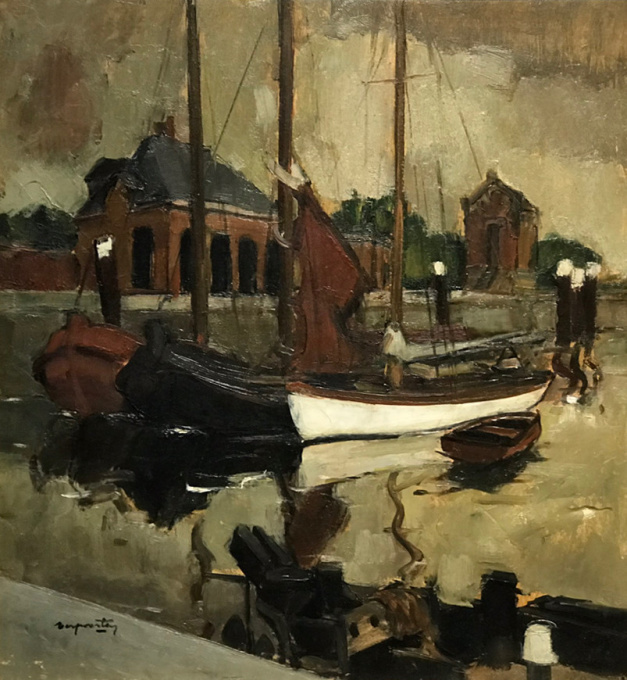 Oscar Verpoorten was a Belgian painter, sculptor and graphic artist. He was the son of a goldsmith and student of the Antwerp Art Academy (among others with Frans Lauwers and Charles Mertens). Became a teacher at the Academy of Berchem in 1935. Verpoorten painted figuratively: city corners, harbor views, marines, landscapes, figures and portraits. His style was post-impressionistic. He can be counted among traditionally working Antwerp painters from the first half of the 20th century, such as Franck Mortelmans, John Michaux, Isidoor Opsomer, Jos Tilleux, René Leclercq, Antoon Marstboom and Georges Van Raemdonck. Typical of a large part of his oeuvre is the use of monotone earth colors in performances in which he then illuminates certain parts. Light and color are more emphatically present in other works.

Oscar Verpoorten (1895, Antwerp – 1948, Antwerp) was a Flemish Post-Impressionist painter and engraver. He was the son of a goldsmith. He was trained to the art of engraving by Frans Lauwers and Charles Mertens at the Royal Academy of Fine Arts in Antwerp. As a painter he was self-educated. After a successful exhibition of his paintings by the society of artists ‘Als ik kan’ (If I can) in 1928, he applied himself completely to painting.

His subjects were harbour views (in Antwerp, Lillo, Rupelmonde, Willemstad), marines, cityscapes, riverscapes (the Scheldt was his favourite river), portraits, figures and still-lifes. In 1935, he became a teacher of the Academy at Berchem (Belgium). In 1939, he was a co-founder and later chairman of the art club ’t Getij (the Tide), and he was a member of Moderne Kunst (Modern Art), a circle of prominent artists, founded in 1927. After World War I, he settled in the vicinity of Antwerp. His works are included in the ‘Koninklijk Instituut voor het Kunstpatrimonium’ (Royal Institute for Patrimony of Art) and the ‘Koninklijk Museum voor Schone Kunsten’(Royal Museum of Fine Arts) in Antwerp.